r was full of festive fun for all the children. With Christmas and winter themed activities going on through the nursery it was a truly magical run into the festive season. We held our annual Christmas Fayre which was a great success. We would like to thank all of you who came to show your support, all the stall holders who came to sell their fabulous wares and to our amazing staff who made the nursery into a winter wonder land and helped to create fun activities for all. Thank you to Carol for producing mounds of delicious mincepies and especially to Father Christmas who took time out of his very busy schedule to visit us again! 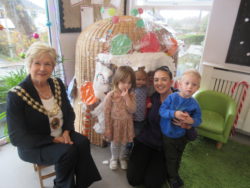 The team at the Mulberry Bush always go to great lengths to ensure that the nursery is beautifully decorated. This year was particularly stunning as the nursery ran a competition between the rooms to see who could be the best! This was judged by Susan Bayford, Mayor of Fareham, who awarded the prize of £350 to the Raspberries Room! The prize was £100 for the team in the room to spend on a fun night out and £250 to 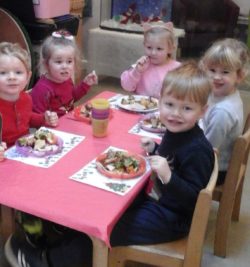 invest in facilities for their room. We hope you agree that all the rooms were spectacular but that Raspberries really went that extra mile.

The Mulberry Bush Christmas Lunch – Turkey with all the trimmings – is always one of the highlights of our festivities and we would like to thank Carol and Becky for producing another delicious celebratory meal for everyone. The children and practitioners had a fabulous time and all looked amazing in their Christmas jumpers/outfits.

Dates for your diary……

Saturday 6th July. Graduation ceremonies happen in the morning and will be split into 2 sessions, we will be able to let you know which one your child needs to attend closer to the time.
Summer BBQ is for all children at the nursery and their families. Charges for food will apply. More details will be sent out closer to the time. This is a fantastic event that is always very popular, we would encourage everyone to come! 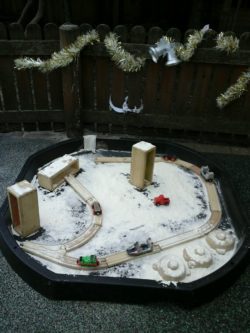 The Blueberries and Strawberries enjoyed their winter themed play exploring how different environments look in the snow. The team built a railway winter wonderland in the tuff tray in the garden using flour for snow. The children were able to push the trains through the ‘snow’ and see how the wheels left tracks. They also made marks with their hands exploring the texture of the ‘snow’ and finding out what they could make it do!

They created a large art piece together making a huge Christmas collage. The children enjoyed using different materials and sticking them to the paper. They were all so proud of what they had made and loved seeing it up on the wall of their room.

At the Mulberry Bush we are keen for the children to spend time outside all year round and the Blueberries have loved their garden time this month. They enjoyed exploring the different environments that our outdoor area offers. They particularly enjoyed rolling the balls through different sized tubes and playing on the see-saw.

The babies are always keen on shredded paper play, especially in the sensory room. They love to throw it in the air and feel it shower down upon them. They like to push it and pile it up, much like real snow, and generally to be able to make as much mess as they fancy and in the sensory room they get to do it with disco lights too! 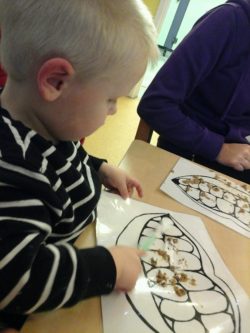 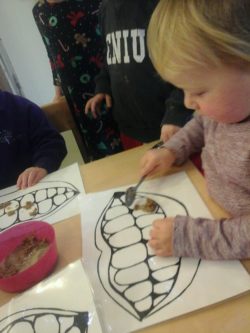 At the beginning of December the Raspberries focused on hygiene and Health & Self-care. This is very important for children at this point in their development as they strive for greater independence. They were particularly interested in dental health so we talked about how we care for our teeth after eating all of our favourite things. To demonstrate this we used large pictures of teeth and tooth brushes. We asked the children what their favourite foods were, a few of our children said their favourite food was Weetabix, so we used a spoon to feed the mouth some Weetabix then used a toothbrush and some toothpaste to brush it off.

During the oral health activity one of our children said their favourite food was ‘Mince Pies’ and with Christmas approaching we thought that a great way to follow their interests and extend the children’s learning would be to make our own mice pies. They all enjoyed measuring out the ingredients for the pastry and helping to cut out the shapes and fill the pies.

The Raspberries all love messy play! So in order to get everyone into the Christmas spirit we set up a fantastic shaving foam Christmas tree! This was a great activity to encourage lots of conversation between the children and help us to extend their developing vocabulary. The enjoyed decorating the tree with some colourful objects and also some of natural objects that we collected from the garden. 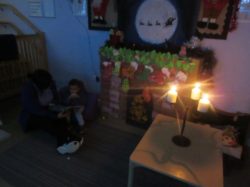 After a very busy and exciting day in the Raspberries Room we settled the children around our ‘fireplace’ and read a story by candlelight. It was very a festive and calming atmosphere and we all enjoyed the activity before heading home at the end of the day.

It would be impossible to cover even half of the fun that the Elderberries have had this month! The children showed a great deal of interest in toy cars early on in the month. They often used the garage and ramps to act out a narrative with the cars. In order to extend this play we introduced wooden ramps and the children enjoyed exploring how far the cars would go across the floor when putting the ramps at different heights and shooting the cars down them! We used this as an opportunity to discuss different thoughts about how far they thought the cars would travel. We then adapted this activity as the month went on using the baubles from the Christmas tree with our plastic guttering and seeing how fast they traveled down the guttering.

The Elderberries made some beautiful Christmas decorations using glass paints and plastic laminating sheets. This was a new medium for the children and they really enjoyed exploring how the paint reacted to the shiny plastic. Once painted we waited for the sheets to dry before putting them through the laminator. We were able to discuss how the heat changed the laminating sheets and the effect that it had on the paint. Some of the children also used tissue paper to make stain glass window decorations. All of them were lovely.

As you can imagine, there were lots of discussions about what Father Christmas might bring the children in their stockings! The children were eager to put their requests to the man himself so they were able to write their letters to Santa at nursery. They flicked through toy catalogues and cut around the toys they wanted to request. This was great practice for their cutting skills. We talked about how to structure their letters, starting with “Dear Santa….” and ending “From ……” We encouraged the children to write their own letters. Some copied actual letters and some improvised their own ‘letter’ shapes!

Many of the Elderberries children had the next step of recognising numerals, counting objects one at a time from a larger group and doing simple maths equations. Through our penguin activity we were able to help them achieve these steps.The children were each given a penguin with a number on it/or maths equation. They then had to catch that number of fish from the icy pond and place them on their fishing rods. The children were given simple equations such as asking them to count out 10 fish, return 2 and then see how many they had left (10-2=8). They really enjoyed the game and learned a lot in the process.

Add us to your address book